You are here: Home / Striker Yến breaks the mould 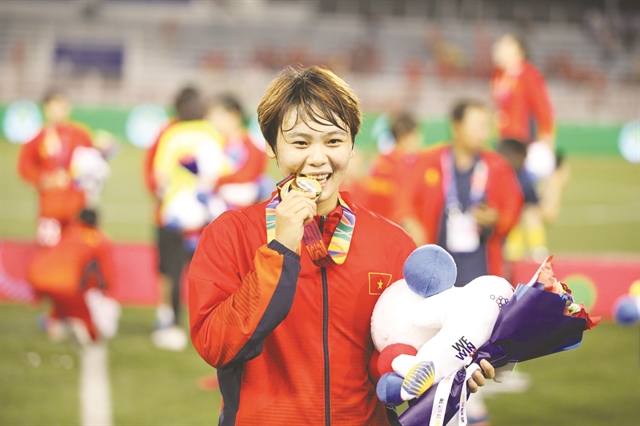 After scoring the winning goal for their country in a massive tournament, you’d expect most footballers to spend the next week celebrating.

Phạm Hải Yến, though, is different.

When the Vietnamese national women’s team striker returned home after heading in the extra time winner against arch rivals Thailand to secure gold at the 30th Southeast Asian (SEA) Games in the Philippines on December 8, she didn’t hit a club or splash out on a lavish meal.

Instead, she lit some incense for her maternal grandmother.

The 25-year-old was itching to return home to Nghiêm Xá Village, Thường Tín District in Hà Nội to pay tribute to a woman who helped Yến live her dream.

Yến’s goal in the final was her first of the tournament, but it was by far the most important strike of all as it secured the 1-0 win and Việt Nam’s sixth title at the biennial tournament, one more than Thailand.

At only 1.62m tall, Yến isn’t a physically imposing footballer, but her industrious and intelligent style of play means she’s always capable of changing a game.

“Yến is a footballer who can play with her head very well. She tried her best at this year’s Games and shone,” said head coach Mai Đức Chung.

“I started Yến in the first half in the SEA Games’ group stage but her form wasn’t that good so I benched her in the final. I only brought her on in the second half. This move aimed to rouse her competitive spirit and it proved successful,” he said.

“Actually my form wasn’t good until the final, so I prepared carefully and waited for my chance,” Yến said.

“When my coach gave me a chance to compete against Thailand in the final, I was determined that I had to play with all my heart as it was my last chance. Luckily, I scored a decisive goal. I was very happy,” she said.

The final match went to extra time lasting 120 minutes, leaving several Vietnamese players injured or cramping up, but it didn’t stop them rallying together to defend their title.

“I was very happy with the result which the whole team won. I hope the female team will receive more support in the next tournaments and fans will travel with us,” Yến said.

Following the region’s biggest sporting event, Yến and her team returned home and had around one week off, which she used to pay tribute to her biggest supporter, who sadly passed away recently.

“I was looking forward to returning home as soon as possible as I wanted to dedicate this victory to my maternal grandmother who died when I was training for and competing in the Games. I couldn’t see her one last time,” said Yến. 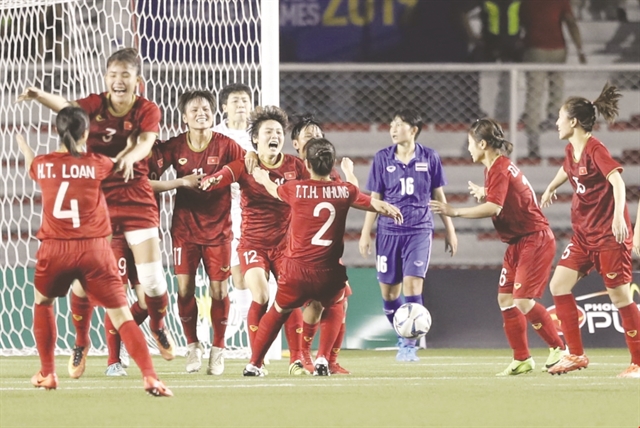 Striker Phạm Hải Yến celebrates with teammates after scoring in the final against Thailand at the SEA Games 30 this year. VNA/VNS Photo Hoàng Linh

As a child, Yến was mostly raised by her grandparents.

“My family was very poor so I had to send Yến to my parents-in-law, who had better conditions than me. Her maternal grandmother loved Yến very much. She always supported Yến unconditionally including her playing football, instead of hanging around the house to play with dolls like other little girls,” Yến’s father, Phạm Văn Mười, said.

According to Yến, the three most important things in her life are family, football and teammates.

“My biggest source of pride is to be one of members of the national women’s football team and do my part to bring glory to the country,” Yến said.

“I have never regretted pursuing football. It is my passion and my happiness.”

Yến has loved football since she was five years old. At that time, female football in the northern province of Hà Tây (now part of Hà Nội) was developing fast. At Yến’s home in Nghiêm Xá Village, there was a female football team coached by Dương Khắc Kiểm.

Almost every day, Yến went to the football pitch near her house to watch Kiểm coach.

At first, Yến’s parents were against her spending all her time on football as they saw little future in the sport for her, and they needed her help with the family’s fish breeding business.

However, because of her love for football, Yến would spend the morning and early afternoon working for her parents, and then race to the pitch in the afternoon.

After seeing Yến’s love for football, her parents decided to let her devote herself to the sport.

When Yến was in the eighth grade, she started down the path towards professional football and began training at the Sports Centre in Hà Đông District, Hà Nội.

“Yến always made us feel secure as she could arrange her time for training and for her education. She was then selected to compete in national U14 and U16 tournaments. At the age of 17, she became captain of the national U19 team,” her father Mười said.

She was top scorer in this year’s National Women’s Football Championship with 17 goals. She also took the golden boot in 2015 and 2018. VNS