You are here: Home / The one who makes the world a better place

On the occasion of the 75th anniversary of the Việt Nam People’s Army on December 22, Bùi Quỳnh Hoa spends the day at the Central Military Hospital 108’s Centre for Craniofacial and Plastic Surgery to understand more about the army doctors’ intelligence and devotion. 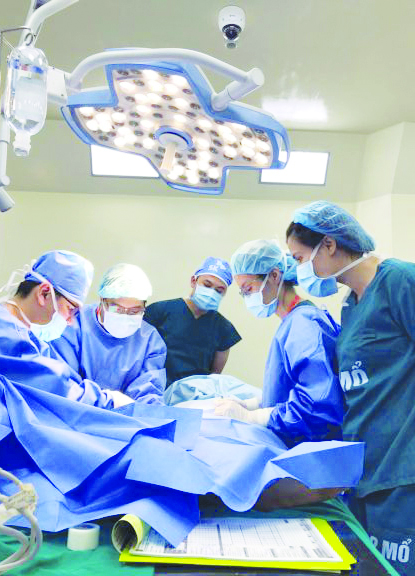 We started the day at 7am. I met Dr Nguyễn Quang Đức and other doctors and accompanied them on their rounds. Around us were patients suffering from facial trauma, giant tumours, cancer and congenital anomalies.

Đức told me his first reconstructive microsurgery would start at 8.30am as we went up to the operating theatre on the sixth floor, which is considered the biggest operating centre in Việt Nam with 50 rooms equipped with advanced equipment imported from Europe.

Anaesthetists started the procedure, as Đức, the head surgeon, directed his team of six. 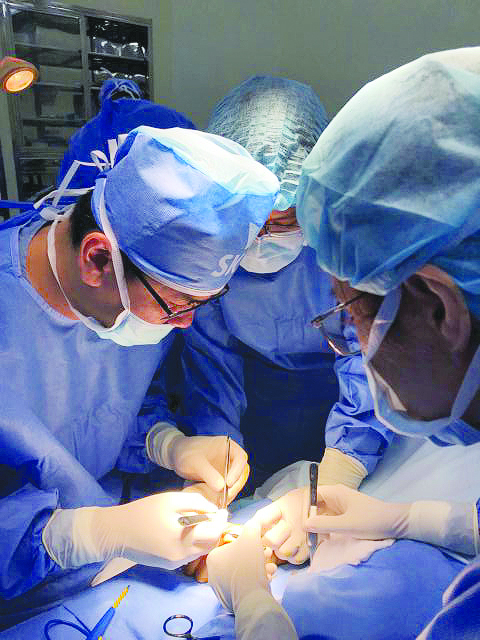 DELICATE: Microsurgical reconstruction is typically reserved for complex reconstructive surgery problems when other options are inadequate, according to Dr Nguyễn Quang Đức.

The operation started at 9am sharp. The room was quiet, except for the noise of the heart monitor and Đức’s loud instructions asking for scissors, scalpels, forceps and other equipment. The surgeons followed his instructions to the letter with intense concentration.

At 4.30pm, the operation was over. I did nothing except watch and take notes, but I still felt exhausted, let alone how the surgeons themselves must have felt.

“During operations, we all need complete focus,” Đức said. “A small mistake can lead to the failure of the whole operation.”

“We forget how tired, hungry or thirsty we feel, and don’t even need to go to the toilet. However, those feelings all come flooding back when the operating light is turned off.”

After having a break, Dr Đức explained to me that reconstructive microsurgery is a surgical discipline that uses microscopes and precision instruments to repair intricate structures such as blood vessels and nerves less than two millimetres in diameter. This field has had a major impact to restore form and function to individuals impaired by trauma, cancer and congenital anomalies.

“Microsurgery is a tool used by plastic surgeons to perform specific procedures including transfer of tissue from one part of the body to another (free tissue transfer), reattachment of several parts (replantation) and composite tissue transplantation,” Dr Đức said.

“Microsurgical procedures represent a wide range of highly individualised operations. It is typically reserved for complex reconstructive surgery problems when other options are inadequate.” 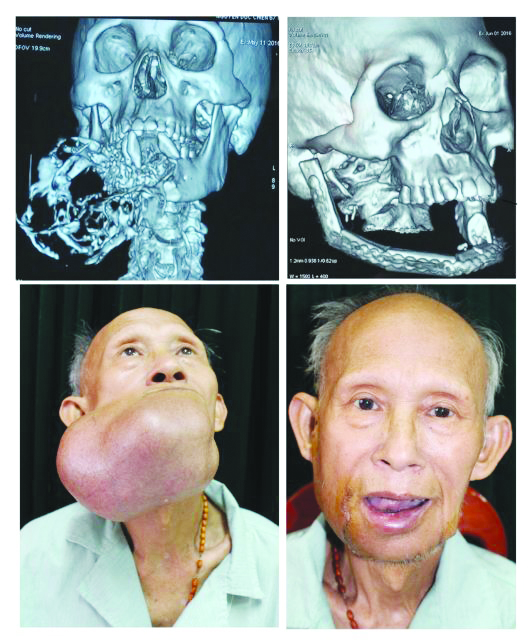 Dr Đức used microsurgery in the case of 70-year-old Nguyễn Đức Chinh from Nam Định Province, who was diagnosed with maxillofacial ameloblastoma 40 years ago.

“The patient had a deformed right cheek, missing teeth and complete loss of masticatory function, and had difficulty in mandibular movement,” Dr Đức said.

“The giant tumour was hard, solid and immobile. The skin was thin and overstretched. Numerous ulcerous lesions were found in the oral mucosa surrounding the tumour. A CT scan showed the tumour expanding from the right condyle to the left mandibular body, with deformity of the mandibular bone.

“The surgical plan included complete resection of the tumour, part of the skin and damaged oral mucosa, which was followed by immediate reconstruction using an osteocutaneous fibular free flap. The surgery was completed with the tumour and the involved part of the mandible. The size of the mucosal gap was 5x11cm, while the tumour was 19x12cm. The operation lasted seven hours. Post-operatively, the reshaped flap survived without vascular compromise. The patient was discharged from hospital after 16 days of treatment. After a two-year follow-up, there was no recurrence of the tumour.” 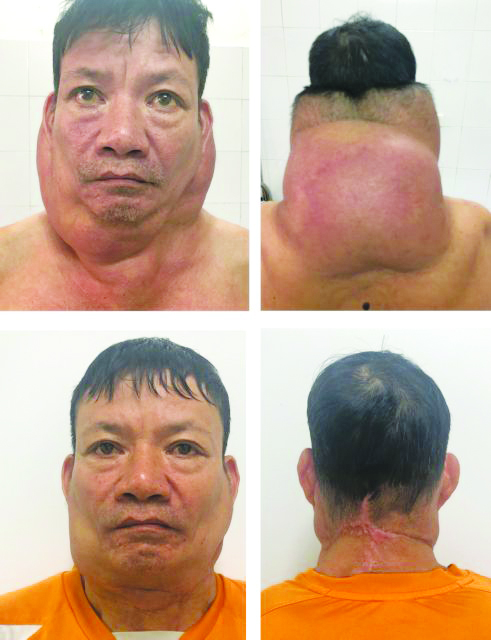 Another case that made Dr Đức famous nationwide was the case of the “bear man”: Trương Văn Thông, 55, from Vĩnh Bảo District in Hải Phòng City contracted madelung disease more than 20 years ago.

“Madelung disease is a rare entity among the overgrowth syndromes. It typically presents between the third and the fifth decade of life and is more prevalent in males,” Đức said.

Giant fatty deposits had deformed Thông’s neck, face and scruff so severely people said he looked like a bear.

“Due to the tumour being so big, a three-step surgical treatment was scheduled,” Đức said. “After using microsurgery, the whole tumour which weighed nearly 5kg was completely removed. All three procedures were a success and the aesthetic results were satisfactory.”

Vũ Thị Bích, Thông’s wife, was full of praise for Đức and other doctors.

“I don’t know how to say thank you to Dr Đức and the others who saved my husband’s life,” Bích said. “It’s a miracle.”

Plastic surgery has been around for thousands of years ago. In the mid-1980s, retired US Army General John W. Vessey accepted an assignment from the Reagan administration to facilitate a rapprochement between the United States and Việt Nam primarily through humanitarian and cultural programmes.

Prof Nguyễn Huy Phan, former Surgeon General of the Việt Nam People’s Army, stood out for his vision of what microsurgery could add to Vietnamese healthcare. At his request, Operation Smile International agreed to explore the possibility of bringing a microsurgical programme to Việt Nam in 1989. 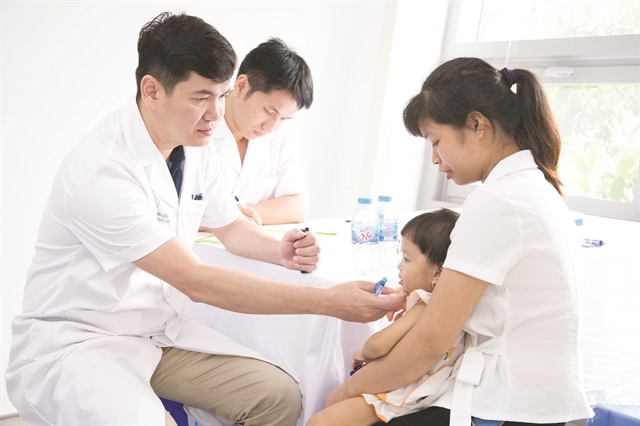 “The army’s healthcare sector has been at the forefront of plastic surgery nationwide,” said Associate Professor Nguyễn Bắc Hùng, chairman of the Hà Nội Cosmetic and Plastic Surgery Association.

“The Central Military Hospital 108 is where the latest techniques are applied. Doctors here can perform operations with a high level of difficulty by themselves. It’s also the main provider of training courses on plastic surgery for both army and civilian doctors.” 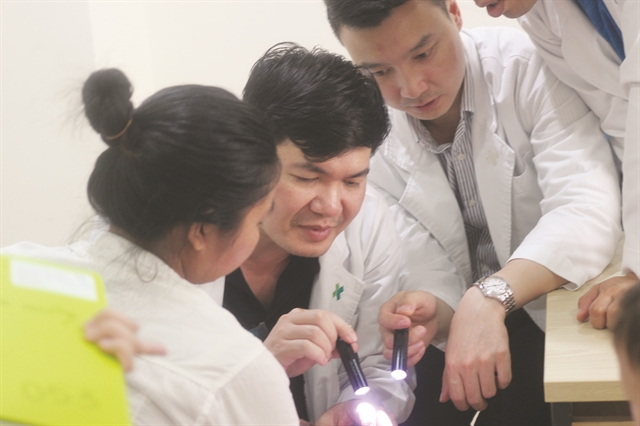 Prof Hùng continued, “Dr Nguyễn Quang Đức is one of our many talents in plastic surgery in general and microsurgery in particular. Along with a profound knowledge of the profession, he is also blessed with skilled golden hands that help him do things most people cannot.

“Dr Đức, together with director of the Centre for Craniofacial and Plastic Surgery Vũ Ngọc Lâm, helped transfer the technique for reconstructing maxillofacial defects using osteocutaneous fibular free flaps to the Hà Nội Central Ondonto-Maxillo Facial Hospital. More than 500 operations using this technique have been performed”.

Dr Đức also perform plastic surgery and gives training courses, including one at the Laos Central Military Hospital 103. During a three-month working trip in 2017, Đức gave check-ups for 350 patients and performed operations on nearly 200 Lao soldiers and civilians.

“His working trip to our hospital made a great contribution to strengthening ties between the two countries and the two peoples of Việt Nam and Laos,” he said. 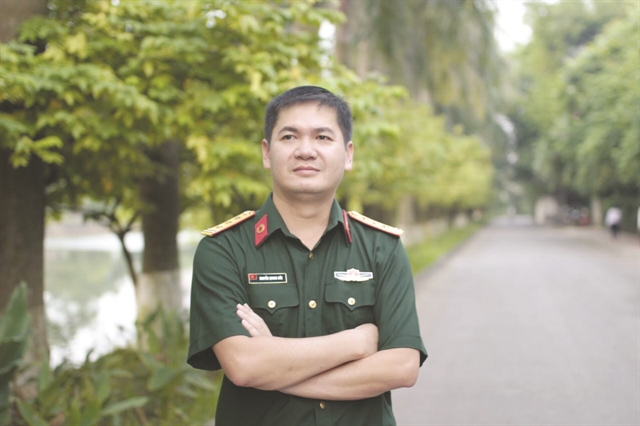 The Central Military Hospital 108’s Centre for Craniofacial and Plastic Surgery has co-operated with non-governmental organisations including Operation Smile, Facing the World and Smile for Children to organise charity missions for 30 years.

An estimated 7,000 free operations have been performed for poor children with congenital deformities in remote areas.

“Dr Đức completed his craniofacial fellowship programme at the Department of Plastic and Reconstructive Surgery, Seoul National University Bundang Hospital. As chairman at that time, I had the pleasure of observing his personal and professional growth. He demonstrated his intelligence, positive attitude and professionalism throughout the programme. His moral integrity and decency as a human being was deeply appreciated by the whole team. Dr Đức’s enthusiasm and desire to broaden his horizons in both intellectual and cultural aspects is a quality that leaders of the plastic surgery field must possess,” he said.

“What sets Dr Đức apart from other plastic surgeons is the genuine empathy he has for his patients and humanity in general. Had it not been for his exceptional courtesy and contributions, the annual charity trips may have remained an unrealistic dream. He sets an ideal example as a great leader, for what young plastic surgeons must strive to attain. I have high hopes for his future career to truly make our world a better place.”

Outside of work, Đức has a sensitive and artistic soul. In his spare time, he writes new lyrics to original melodies about issues related to the healthcare sector. His parodies have gained attraction and support among colleagues and netizens on his Facebook page and other healthcare fan pages like Nhật ký bác sĩ (Doctors Diary), Y học tổng hợp (General Medicine) and Bác sĩ nội trú (Interns).

Being a doctor is hard enough, but being an army doctor is much tougher, but hard work and dedication pay off. VNS